Back to News Archive page 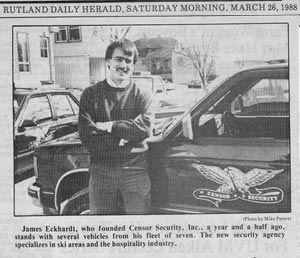 Censor Services was on its way. By 1988 we had expanded to Waterbury B&J's factory (current client). As we picked up more clients the word of mouth really started to kick in and the phone really started to ring. In 1989 we broke into the Burlington market picking up the Sheraton Hotel, the University Mall and the Doubletree Property within months followed shortly there after by the Hilton Hotel (all coincidentially still clients). So after 3 years of 100 hour work weeks it looked like I could start to settle down the company was going strong. 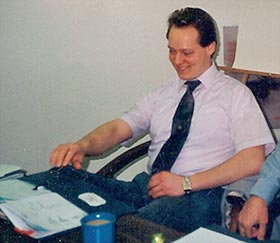 That settling down was very short lived as the Finard Company (owners of University Mall) had a building in Manchester,  NH that they wanted us to take a look at. Needless to say we did look at it, we did obtain a license in NH in 1991 and what happened in Vermont repeated itself in New Hampshire. We now had 3 offices in two states and once again the 100 hour weeks returned. I remember clearly Rick Milliken (GM for the Sheraton) telling me that as I continue to grow the quality of the service would start to suffer. My comment was that this would not happen with my company. By the year 2000 I was starting to realize that Mr. Milliken was correct. We had now grown to three states, 5 offices and 188 officers. My hours were still hovering around 80 hours a week. Only now my personal life had gotten more enjoyable with the addition of two children. Getting home at 11:00 pm and leaving at 6:00 am was no longer appealing. The quality of our product was starting to suffer from growing pains and I was forced to admit to Rick that he was right.

In 2002 I made a decision that being big was not worth sacrificing quality. I never wanted to be the biggest I wanted to be that local company that provided a continuously good level of service. I wanted to know my employees on a first name basis. I wanted to go to lunch with my clients and form those kinds of bonds that New England is known for. I decided that now was the time to trim the bush so to speak. I closed all the offices and dropped back to around 60 officers in Vermont and Western New Hampshire. This was easily manageable for a small management staff.

Starting this company was much like raising a child it started as a baby and grew into the teenage years of disobedience and mischief. It's now in the stage where it is really starting to settle down and look towards a mature future. Me on the other hand find that I am not good with idle time I immediately picked up asst. coaching for kids sports teams. As the kids got older and that need diminished I decided to run for the Legislature and work to make Vermont a little more business friendly. I was asked to join multiple Boards  from business groups to schools and in 2006 I was awarded by the Legislature and the NFIB as the small business champion for the State of Vermont.

Censor Services has remained at around 60 officers even through the difficult recession and it is poised to continue doing well. We have now become more of complete loss prevention organization with security officers, theft detection investigators and CCTV installations and we are not done yet. I look forward to the next 20 years.

Back to News Archive page

As the company ages we need to keep up with the times. Here are a few of the plans.... Read more here...